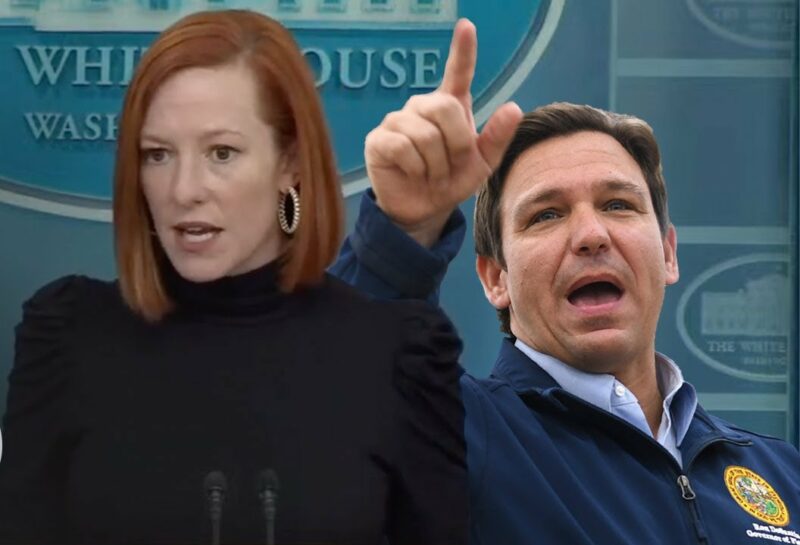 DeSantis Calls Out Psaki Saying She “LIes Through Her Teeth”

Republican Florida Gov. Ron DeSantis called out White House press secretary Jen Psaki over the statements she made about Florida’s handling of COVID-19.

Psaki said Friday that Florida had taken “little to no steps” to distribute funds that would ensure school districts remain open during the pandemic. The Florida governor responded by saying the press secretary “lies through her teeth” during a briefing at Miami-Dade College Wednesday.

“An example would be Florida, where they have done little to distribute money — little to no steps to distribute money across the state into school districts,” Psaki said. “Part of it is you have to write a plan for how you’re going to keep schools open to get the third tranche of money and some have been delayed in that, but right now that’s an example of a state that can do more.”

“The White House press secretary stands in front of that podium and lies through her teeth every single day and it’s usually about the state of Florida. The other day, she said Florida hasn’t done enough to get schools open,” DeSantis said. “Are you kidding me? I remember them criticizing me when we did this almost two years ago. We were the only big state to have every school district open for in-person, and we did that way before Biden was even president.”

“We didn’t need the Biden stimulus money for that. We did it, we opened them and they’re saying ‘Florida didn’t do it and you look right now at all the school closures across the country. You don’t see that happening here like you do there and yet that’s what they do,” he continued.

DeSantis also took issue with Psaki’s statement that the monoclonal antibody treatments (mAbs) from Regeneron and Eli Lilly are ineffective in treating the Omicron variant during a Tuesday press briefing. The governor called her statements “a lie” that support the administration’s political position.

“So recently, she said that monoclonals do not work, definitively do not work against Omicron and they have really bad side effects,” DeSantis stated. “That’s what she said! And that is not true based on what we’ve seen in the state of Florida. But the idea that this has led to massive, adverse reactions is just a lie. And it is a lie designed to buttress politically a position that they have taken, which is just indefensible, as a matter of policy, as a matter of basic decency for people.”

The Food and Drug Administration (FDA) announced Monday that emergency authorization use (EUA) for two monoclonal antibody treatments (mAbs) from Regeneron and Eli Lilly would be revoked due to its ineffectiveness in fighting Omicron. The order led to 2,000 Floridians not getting the antibody treatment they had been scheduled for.

DeSantis, along with Florida health officials, began advocating in August for the use of monoclonal antibodies for individuals experiencing COVID-19 symptoms to treat those with mild-to-moderate symptoms of the virus. The governor condemned the administration’s “royal decree” of revoking Regeneron and Eli Lilly, claiming the order “takes treatments out of the hands of medical professionals” in a Monday statement.

Ron did a great job, and the idiot in the WH fucked up all he touched. Little red ridding slut is a seasoned liar. She lied for the nigger Bama too.