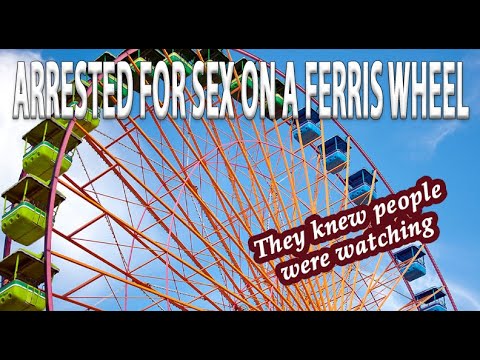 A couple was arrested for having sex on a Ferris Wheel while visiting an amusement park in Ohio.

Fellow park goers complained that the couple was engaged in the not-so-family-friendly activity. The couple, both 32 years old, was seen having sex in one of the cars on the cedar Point Park’s Giant Wheel attraction, according to the police report.

Other parkgoers on the ride, including two juveniles, complained to operators that they’d seen the couple naked with their car rocking back and forth, the report said.

“The group said that the couple knew that they were watching and started laughing and continued their behavior,” according to the police report.

The couple initially denied doing the deed on the ride, which climbs to heights of 145 feet.

The 32-year-old woman initially claimed that she had simply dropped a pack of cigarettes from the shorts she was wearing underneath her dress and her partner was helping her pick them up.

Police said the couple later admitted to having sex on the ride. The couple was arrested and charged with public indecency