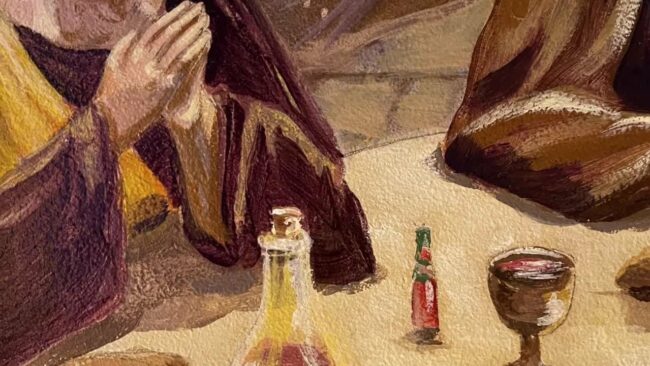 Inside St. Joseph Catholic Church in Parks, a painting of The Last Supper features a bottle of original Tabasco sauce recently caught the attention of the company that makes the iconic hot sauce.

The Last Supper typically depicts Jesus Christ dining with his 12 apostles, the most famous version painted by Leonardo da Vinci.

In the St. Joseph Church painting, the famous Louisiana pepper sauce, known for its red and green branding, sits in front of one of the disciples.

The church’s pastor, Nicholas DuPré, said the previous pastor had mentioned the bottle when he arrived at St. Joseph in 2019.

“He was like, ‘Did you find that Tabasco bottle?’ And I was like, ‘What?’” DuPré said. “I heard it from him. I think I’ve heard it from a few other people, but I never really cared to go look for it.”

Then DuPré received a letter from Shane Bernard, a curator, and historian from the McIlhenny Co., which produces the hot sauce on Avery Island in Iberia Parish, asking if an “urban myth” he’d heard about the painting was true.

“It is no myth,” DuPré said in a Facebook post featuring a picture of Bernard’s letter and a closeup of the painting.

Two after the post, a large commemorative collector’s bottle of Tabasco sauce arrived at DuPré’s doorstep.

“I highly advise looking for hidden bottles of Tabasco sauce in whatever art is hanging in your church. The McIlhenny Co. was kind enough to give me this bottle just for having a little fun,” DuPré said on Facebook.

DuPré said he’s not sure what he’ll do with the commemorative bottle, but said he may put it in a vestibule with some directions for finding the bottle in the painting.

The painting was commissioned around 2003 by the Rev. Bryce Sibley.

Christie Hebert, the artist, said Sibley told her not to do an exact replica of the da Vinci painting.

“He wanted me to make it unique to our area,” Hebert said.

Sibley, who left St. Joseph in 2008 and now teaches at Notre Dame Seminary in New Orleans, said the church needed a facelift when he arrived in 2003, including new paint and artwork.

“I’ve always liked the little human element from different works that I had seen,” Sibley said. “So I said well, ‘Why don’t we insert the bottle?’ I’ve been sort of touched by the way that people find the human element of the story so compelling.”