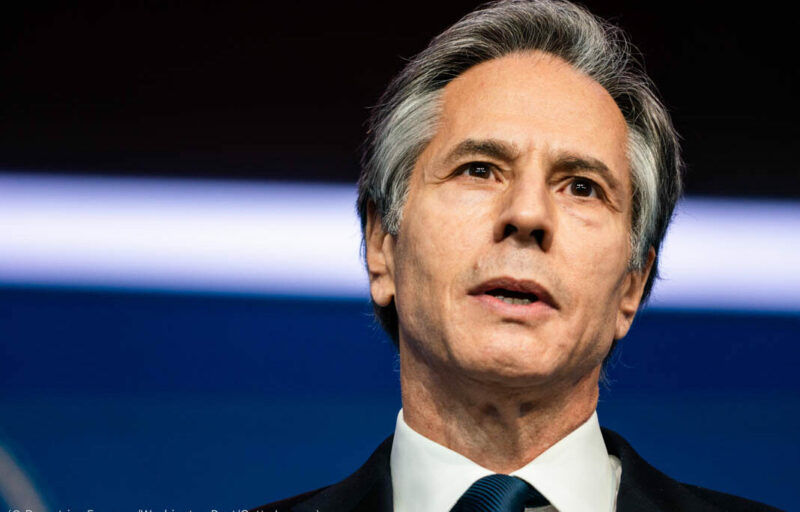 Blinken Says Russia Planned To Invade Ukraine “All Along”

Secretary of State Antony Blinken asserted on Tuesday that an invasion of Ukraine has been Russia’s plan “all along,” despite the Kremlin’s claims to the contrary.

Russian President Vladimir Putin’s “plan all along has been to invade Ukraine; to control Ukraine and its people; to destroy Ukraine’s democracy, which offers a stark contrast to the autocracy that he leads; to reclaim Ukraine as a part of Russia,” Blinken said in a joint press conference with Ukrainian Foreign Minister Dmytro Kuleba at the State Department. “That’s why this is the greatest threat to security in Europe since World War II.”

Blinken’s comments came hours after President Joe Biden introduced a series of economic sanctions against two major Russian banks, on the country’s sovereign debt, and on Russian elites and their families. The sanctions were an economic response put in place by the U.S. after Putin recognized the breakaway Luhansk and Donetsk regions as “independent” and sent troops into the regions.

Blinken noted that the United States has held firm in saying that if Russia invaded, the U.S. — in cooperation with its allies — would impose economic sanctions. Further U.S.-led consequences could follow if Russia continues its current operations.

“Now that Russia has moved against Ukraine, so, too, have we moved on our strong and unified response,” Blinken said. “We’ll continue to escalate our sanctions if Russia escalates its aggression toward Ukraine.

Last week, Blinken announced plans to meet with Russian Foreign Minister Sergey Lavrov and discuss diplomatic solutions with the caveat that such a meeting would not happen if Russia invaded Ukraine. On Tuesday, Blinken announced that his Feb. 24 meeting with Lavrov had been canceled.

“Now that we see the invasion is beginning and Russia has made clear its wholesale rejection of diplomacy, it does not make sense to go forward with that meeting at this time,” Blinken said.

Blinken noted that the U.S. and its allies continue to be open to a diplomatic solution, averting an “an all-out assault on Ukraine,” if Russia should choose to de-escalate.

Kuleba thanked the U.S. for “standing with Ukraine” using economic sanctions, noting that a diplomatic solution was still the preferred solution. “Plan A,” Kuleba said, is to utilize “every tool of diplomacy” to deter Russia; should that fail, “Plan B” is to “fight for every inch of our land in every city and every village.”

Kuleba agreed with Blinken’s statement that Putin has brought the world to the brink of its “largest catastrophe since World War II.”

“What stops him is only our unity and resolve,” Kuleba said. “And we can still stop him.”

Blinken, like his boss doesn’t know his ass from a hole in the ground!