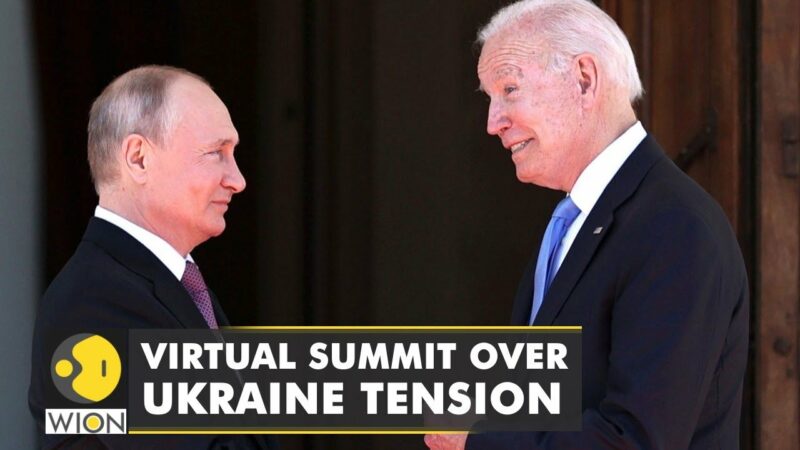 In preparation, Biden spoke with European allies Monday about the “shared concern about the Russian military build-upon Ukraine’s borders and Russia’s increasingly harsh rhetoric,” the White House said. Senior administration officials told reporters that Biden “will make clear that there will be very real costs should Russia choose to proceed, but he will also make clear that there is an effective way forward with respect to diplomacy,” suggesting that Biden is pushing for a more diplomatic solution.

Biden did not directly mention sanctions, one senior administration official told reporters that our European allies and the U.S. agreed on sanctions that would cause “significant and severe economic harm on the Russian economy.” The official avoided speaking about the idea of getting involved militarily, saying that they are “not seeking to end up in” such “a circumstance.”

“We have had intensive discussions with our European partners about what we would do collectively in the event of a major Russian military escalation in Ukraine, and we believe that we have a path forward that would involve substantial economic countermeasures by both the Europeans and the United States,” the official said.

“I don’t want to use a public press call to talk about the particular sensitive challenges that President Biden will lay out for President Putin. But I would say that the United States is not seeking to end up in a circumstance in which the focus of our countermeasures is the direct use of American military force,” the official continued.

The official declined to say whether Biden would discuss “what circumstances the U.S. military could get involved” during his phone call with Putin, saying only that they’d “prefer to keep those communications with the Russians private.”

Even with the threat of sanctions and retaliation from the U.S., tensions have continued to build between Russia and Ukraine. U.S. intelligence thinks that Moscow may be preparing for a “massive” multi-front offensive against Ukraine, potentially in the next few weeks.

“The troop movements have involved the addition of battalion tactical groups around Ukraine in multiple, different geographies around those borders – to the south, the west, and to the northeast as well,” a senior administration official said. “And we have also seen, as Secretary [Antony] Blinken said last week, a significant spike in social media activity pushing anti-Ukrainian propaganda, which is approaching levels that we last saw in the lead up to Russia‘s invasion of Ukraine in 2014. ”

Biden, in addition to Tuesday’s video conference with Putin, has been in “constant contact” with the Ukrainian government. He said Friday that the administration is putting together “the most comprehensive and meaningful set of initiatives” aimed at making it “very, very difficult” for Putin to move ahead with an invasion. Biden said that he is “looking forward to the opportunity to engage” with Putin during the video call.

White House press secretary Jen Psaki mirrored his sentiments on Monday, saying that the administration has “been preparing a range of economic sanctions or economic options that could have a detrimental impact on the Russian economy.”
Subscribe
Login
5 Comments
Oldest
Newest Most Voted
Inline Feedbacks
View all comments

I can see Putin shaking in his boots and I don’t live anywhere close to Alaska.

LMAO…blow hole killer Joe OKed Russia’s pipe line, while shutting ours down. It’s the Russia first program. America last. They, like China own the asshole!

No more borscht for you, Putin!