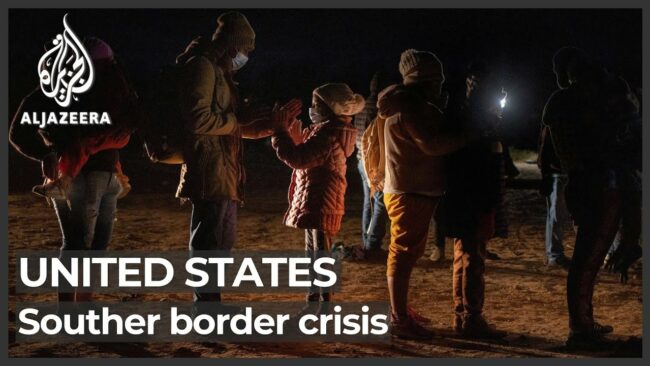 Biden Calls On Congress To Help Secure The Borders

During his State of the Union address Tuesday, President Joe Biden called on Congress to help him secure the southern border, saying his administration has already taken action to impeded the number of migrants coming across the border.

Biden’s first year in office has seen record-breaking numbers of migrant crossings, with apprehensions soaring throughout the year. Biden claimed his administration has already made tremendous efforts to cut down on border crossing.

“If we are to advance liberty and justice, we need to secure the border and fix the immigration system. We can do both,” Biden said. “At our border, we’ve installed new technology like cutting-edge scanners to better detect drug smuggling. We’ve set up joint patrols with Mexico and Guatemala to catch more human traffickers.”

Biden did not mention his appointment of Vice President Kamala Harris as his administration’s border czar. Harris has taken multiple trips to South and Central America in an effort to cut back on the “root causes” of illegal immigration, such as poverty and violence in migrants’ countries of origin. Harris’ efforts have been met with criticism, however, and have had little effect.

Biden also called for creating a path to citizenship for Dreamers as well as farmworkers who have illegally immigrated to the U.S.

‘We can do all this while keeping lit the torch of liberty that has led generations of immigrants to this land—my forefathers and so many of yours,” he said. “Provide a pathway to citizenship for Dreamers, those on temporary status, farmworkers, and essential workers. Revise our laws so businesses have the workers they need and families don’t wait decades to reunite.”

The asshole was the one that opened the border.

Way to funny … Biden now acts like this is his idea to fix the border when in fact it’s his fault its in the shape it’s in . Guess he has no idea about that , or no one told him they were destroying our borders in his name . Fix the borders , fund the police , reunite the country and both party’s. Is he really that retarded ??? After stopping everything Trump fixed , he destroyed everything in the name of stupidity with no real purpose other then to make Trump look bad . Shows how stupid the delusional democrat preally is . Guess they figured we won’t understand anything vthey did or why they did it . But now like the light came on and Biden has a idea … no … how can anyone … beside turkey neck Nancy … really think he’s smart enough to figure anything out . She has to act like old Joe is the man and has all the answers . Never mind her and old Joe used to do the nasty together . Sorry Biden but we the real p aren’t falling f9r your BS story’s and act like it’s a winning idea , notcafter you spent a year causing all the trouble in our country . Eat sh#t and choke on it