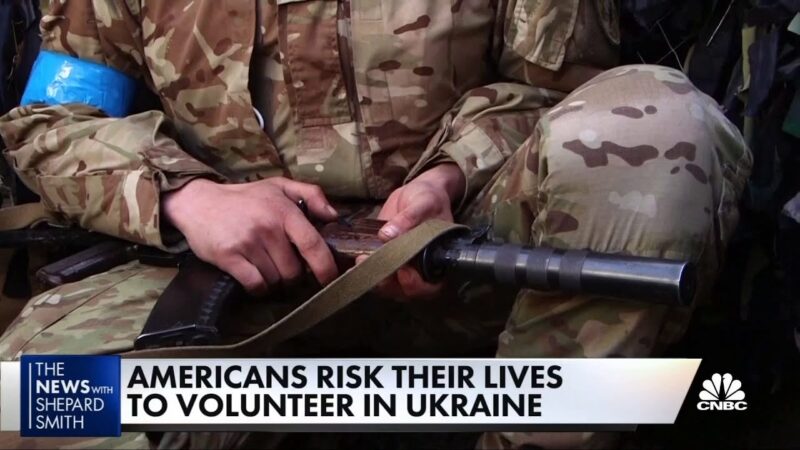 American Volunteers Risk It All To Fight For Ukraine

Thousands of foreign fighters have gone to aid Ukraine. One fighter said that sometimes joining the war and getting access to weapons is as easy as just crossing the border.

Approximately 20,000 people are believed to have responded to Ukrainian President Volodymyr Zelenskyy’s call to join Ukraine’s International Legion, a unit within the Ukrainian Defense Ministry. Some Americans and Canadians have joined the war independent of registering with the Ukrainian military.

Marine Corps veteran Brian Altamirano said he had applied for Ukraine’s International Legion, but changed his mind after realizing that members rarely see combat on the front lines.

Instead, he decided to independently “freelance” with a group of American veterans on the ground in Ukraine.

To get into Ukraine, Altamirano said he simply went to the Poland-Ukraine border with a group of U.S. veterans and presented his passport.

Altamirano said he made his will before going. He’s 29-years-old and is currently attending Columbia University.

“There’s a possibility that I will never make it back to the United States,” he said.

“In the military, there’s a concept of a calling. It’s the idea of something grasping you, and an inner desire to do something more … I was compelled to do more than just care packages,” he added.

He and his team are instructing Ukrainian soldiers on American military tactics in southern Ukraine, including how to walk in columns, and survey rooms, how to fight when there are civilians around, and how to use specific weapons and provide medical aid. Some of the Ukrainian soldiers are civilians who are volunteering to go to the front lines and have zero experience, he said.

“We are trying to get our hands on a Javelin … so we can teach people how to use that as well,” he said.

He said there have been casualties of Ukrainian soldiers from his team and that what he has seen has been “horrible”.

“When it comes to combat, it’s something you have to experience to truly understand it,” he said, noting that a lot of members of the U.S. military would not be ready for fighting the Russians.

Altamirano said his group will be moving further east to fight with a Ukrainian militia since the military has “a lot of cautionary things to prevent us from engaging with the enemy in a faster way.”