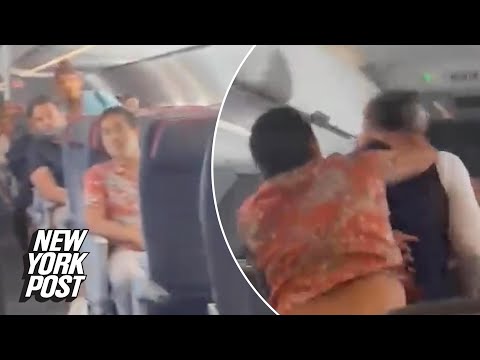 A passenger aboard a flight from Cabo to LAX was arrested Wednesday after he was captured on video sucker-punching a flight attendant in the back of the head.

The Department of Justice announced Thursday that 33-year-old Alexander Tung Cuu Le has been charged with one count of interference with flight crew members and attendants. The incident took place shortly after Le told another passenger that “there are 10 killers on the plane.” He then punched a male flight attendant in the back of the head while he had his back turned.

Fellow passengers aboard American Airlines Flight 377l rushed to the attendant’s aid. Several passengers apprehended Le and held him down while others restrained him with seatbelt extenders and zip ties, the Department of Justice said in a statement.

Airlines said that acts of violence against crew members will not be tolerated.

“The individual involved in this incident will never be allowed to travel with us in the future, and we will work closely with law enforcement in their investigation,” the airline said in a statement.

“We thank our crew for their quick action and professionalism to ensure the safety of their fellow team members and customers on board. Our thoughts are with our injured flight attendant, and we are ensuring that they and their fellow crew members have the support they need at this time,” American Airlines added.

Le was to appear in Los Angeles court Thursday afternoon and faces charges that could carry up to 20 years in federal prison, according to the Department of Justice